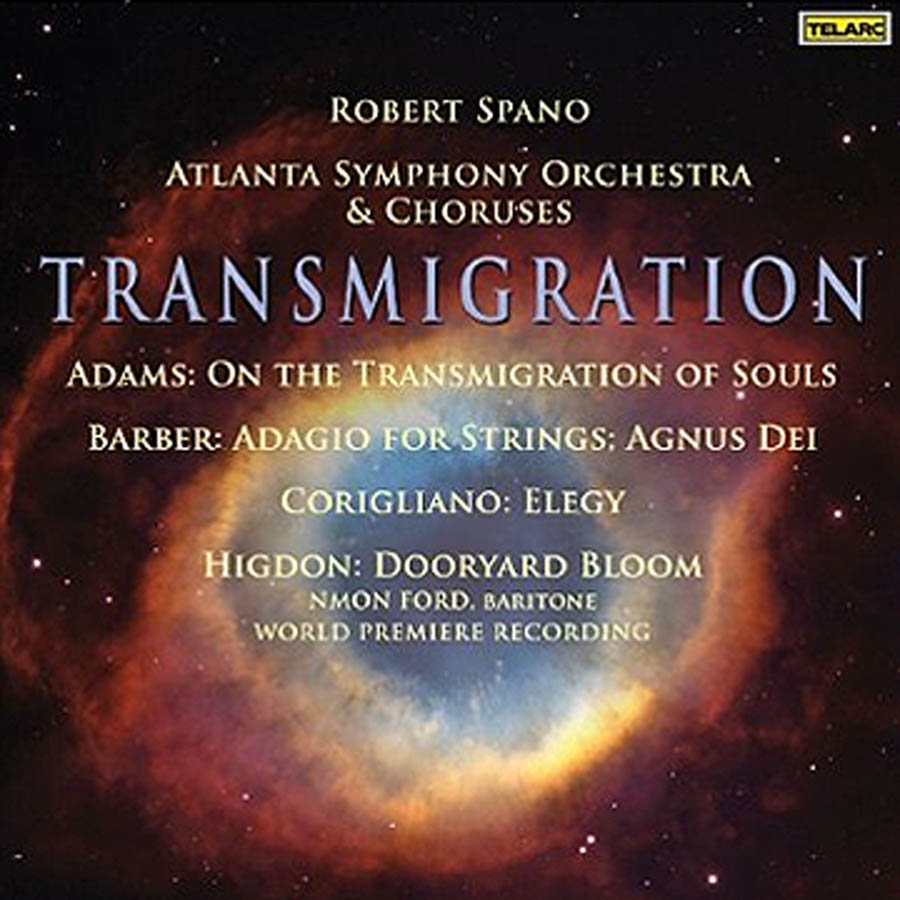 ATLANTA, GEORGIA – FEBRUARY 2010: Michael Bishop (recording, mixing and mastering engineer) and Elaine Martone (producer) have created a compelling and timeless work in Transmigration, a Super Audio CD release on Telarc Records devoted to honor and remembrance. The recording recalibrates the creative and emotional possibilities of surround sound, a fact reflected in the team’s recent win of “Best Surround Sound Album” at the 52nd Annual Grammy Awards, which earned Bishop his ninth Grammy and Martone her fifth. As with his other award-winning recordings, Bishop relied on ATC monitors throughout recording, mixing and mastering phases to reveal the undecorated truth, allowing him to correct problems that other monitors would have blurred over. As a result, Transmigration is compelling when played back on any system and worthy of the industry’s highest honor.

Transmigration features Robert Spano conducting the Atlanta Symphony Orchestra and Choruses at the Woodruff Arts Center in Atlanta, Georgia. It is a collection of hymns and requiems featuring the compositions of Samuel Barber, John Corigliano, Jennifer Higdon, and John Adams. Adams’ “On the Transmigration of Souls” forms the album’s cornerstone and is a reflection of personal grief for the victims of the World Trade Center tragedy on September 11, 2001.

“All of the pieces on this album are emotionally charged,” said Bishop, “but ‘On the Transmigration of Souls’ is especially so. There is a lot going on with the orchestra, an adult choir, a children’s choir, and additional recordings. All of the parts are important, but it is difficult to get them all to coexist in stereo. I saw this as a great opportunity to use surround sound to provide every component with the space it needed to contribute its full emotional impact. To be sure, I wasn’t attempting to recreate the three-dimensional acoustics of ‘the best seat in the house.’ On the contrary, this is a very creative use of surround sound.”

The number of projects that Bishop has recorded at the Woodruff Arts Center is closing in on 100, and this level of acoustical familiarity allowed him to take the basic pickup (almost) for granted. His trusted Neumann KU 100 binaural head provided the basis of the stereo pickup, with a Sanken CO-100K, Sennheiser MKH-8020 condensers, and an AEA R-84 ribbon mic completing the stereo pickup. Because the stereo mix had to remain consistent and sensible, instrument positioning had to remain somewhat conventional.

So instead of moving the players to opposite ends of the hall, Bishop used creative mic placement to reposition things sonically in the surround sound field. This had the dual advantage of allowing him to “move” players in real-time by mixing in different mics as appropriate for the score. The main mics were Sanken CO-100K condensers and AEA R84 and R-88 ribbons. Additional Sennheiser MKH-8020 mics covered both the adult and children’s choruses. “I wanted the choruses to surround the listener,” said Bishop. “The adult chorus is mainly in the front with smaller parts from the children’s chorus in the rear.”

Bishop mic’d the back of the orchestra – the brass and percussion – with a stereo Royer SF-24 ribbon. He routed its output to the rear channels, effectively pulling the orchestra inside out. The mic comes and goes in Bishop’s real-time mix, presenting traditionally and dimensionally-contorted sonic views of the orchestra according to the score. At times, the front strings play percussively, and Bishop again used creative real-time mixing to move them to the rear channels as counterpoint to everything else that was happening. A second SF-24 mic provides much of the orchestra surround ambience pickup and was very important in completing the surround “picture.”

“The tricky part of all of this was that I was executing the mix in real-time, committing only the six mixed channels to our Sonoma DSD workstation,” said Bishop. “Having five ATC SCM 150 monitors on hand was critical. I went into this with an idea of what I wanted in my head. The process of positioning, mic’ing, and mixing the players is the realization of that idea, which of course remains flexible to the sort of inspiration that can happen in the moment. The ATC SCM 150s close the loop on what I’m expecting, what I’m hearing, and what I can anticipate later in post and mastering. And they do it with an honesty that can be frustratingly elusive with other monitors.”

As with his other recordings at the Woodruff Arts Center, Bishop set up a makeshift control room in the middle of the music library using RPG Acoustics. He used a combination of Upstate Audio and Millennia Media mic pres together with EMM Labs and DAD converters. In post, Bishop mixed in sound recordings of actors reading from the list of 9-11 victims made by sound designer Mark Grey, along with his own on-location sounds of Manhattan made in full surround DSD.

“I’ve been working on the ATCs for so long,” said Bishop. “I rely on their ability to deliver recordings that translate on any system. They are effortless to mix on because I don’t need to do any mental compensation – I know exactly what the mix will sound like elsewhere. In addition, the ATCs reveal even minute changes – I don’t need to bludgeon something to hear it. During the recording, we had the rare treat of having the composer on hand. John confessed that before that session, he didn’t fully appreciate the possibilities afforded by surround sound. But after sitting in our makeshift control room, surrounded by five ATC SCM 150s, he said he finally got it.” Listeners to Transmigration will certainly agree.

Bishop is now a partner and recording engineer at Five/Four Productions in Cleveland, Ohio, and Elaine Martone is Interim Artistic Administrator with the Cleveland Orchestra. Both were members of Telarc Record’s prestigious production team before corporate restructuring in 2008.